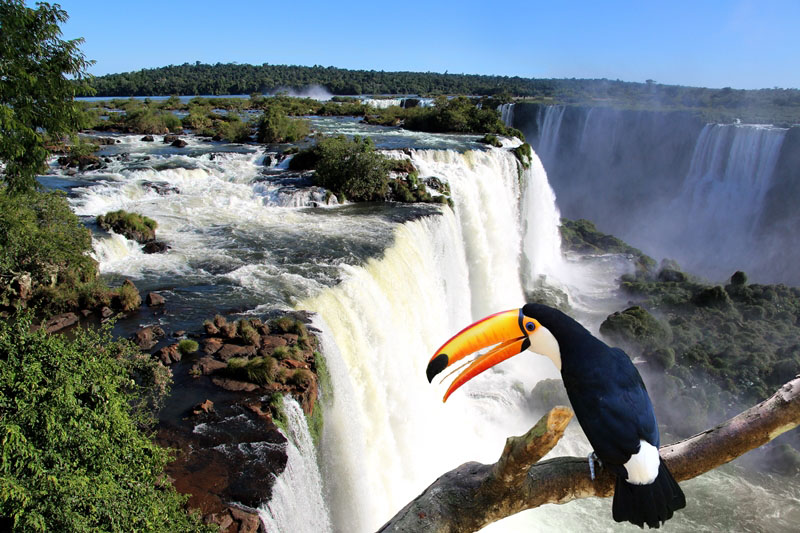 Breakfast. At the right time, pick up at the hotel for Private transfer from Hotel to Rio de Janeiro Airport with Portuguese speaking driver. Arrival in Foz do Iguassu. Meeting at the airport and Private transfer from Foz do Iguassu Airport to the Hotel with Portuguese speaking driver. Check-in and accommodation. Free night. Overnight.

Breakfast. At the right time, pick up from your hotel to visit the Brazilian side of the Iguassu Falls with English speaking guide. After arriving in the Iguaçu National Park, considered the largest reserve of subtropical rainforest in the world, you will take a panoramic bus to Iguassu Falls. With about 275 waterfalls approximately 70 meters high each - the largest is the Devil's Throat with 85 meters in height - the Falls are a nature spectacle. You can observe them from several suspended walkways that exist near the falls. At the end of the tour you will be taken back to your hotel. Overnight.

Breakfast. At the right time, pick up at the hotel for private transfer from the hotel to the Foz do Iguassu Airport with Portuguese speaking driver. Arrival in Rio de Janeiro. Meeting at the airport and Private transfer from Airport to Buzios hotel. Check-in and accommodation. Free night. Overnight.

Breakfast. At the right time, pick up at the hotel for Private transfer from Buzios hotel to Rio de Janeiro Airport with Portuguese speaking driver. End of program.

Buzios is a peninsular city located in the west of the state of Rio de Janeiro. The old fishing village became known to the general public in the 1960s after the visit of French actress Brigitte Bardot. It is famous for its beautiful beaches with crystal clear waters and mild climate. Its waters may be cold in the beaches to the south side of the peninsula due sea currents coming from Argentina or warmer on the beaches to the north side due currents coming from the region of the Ecuador line. There are also beaches of different types, with great waves, perfect for surfers, or more calm. Among other activities that can be carried out in the city are fishing, diving, boat and trolley trips.